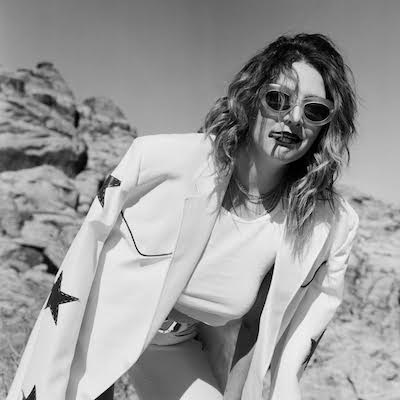 Valkryie is out now on all streaming services.

From Topanga Canyon, a mountainous LA suburb, Lou lives by the mantra ‘joy is king!’ – a saying that comes from her admiration for the chaotic, adult playground of Las Vegas. ‘Chaos reigns. All is permitted’ she sings on Valkyrie, immediately declaring how the limitlessness of her music matches up with the city she so idolises.

‘Valkyrie’ is a vibrant showcase of the humour, invention and peacock swagger that permeates Lou’s music. Lou calls our attempt to give meaning to the chaos of life “sweet” and life’s unpredictability echoes in her urgent genre shifts which take in rock’s most outlandish moments, the playfulness of pop and the straight-up quality of folk.

The new single finds Lou assembling the Valkyrie – “female figures in Norse mythology who ride horses through the sky with big, long swords and are very sick”, Lou’s description – to overcome a particularly brutal trauma.

Of the track, she said: “The song began with me tapping my water bottle while listening to my buddies have a conversation around me. It was called “water bottle birthday beat” for months, until one night in July I got high and decided to just put the beat on loop and improvise lyrics. I had a panic attack a few days before, and had recounted that in the opening line, and from there I just decided to go stream of consciousness based on that. Apparently, I was feeling angry and vengeful – the rest of what came out was all about embracing rage.

“Then in a sudden shift of perspective, I noticed I wanted peace and quiet and asked myself, “hey man, whatcha doin? Come on back, I need you movin!”. It was a gentle request to please not be so upset, I’m scaring me!”

A debut album that promises to take us on a journey through “personal mordors and candylands” follows early next year.